This was my first road bike. The Grand Jubilé was at the top of Motobécane's "touring" lineup, though it's really a more of a "sport touring" bike since it lacks mounts for water bottle cages, racks, and cantilever brakes. The model got its name from the derailleur that it was originally spec'd with, the Huret Jubilee, which, at just 145 grams, was the lightest derailleur made at the time. Later models however, such as this one, feature the the Suntour Cyclone, a similarly legendary lightweight touring derailleur weighing a slightly heavier 190 grams. This particular Grand Jubilé is supposedly a 1979 model. It was originally purchased by my aunt's boyfriend from the Cambridge Bicycle Exchange. I've been told 1979 was a bit of a transition period between European and Japanese components. It's got Japanese gears and derailleurs, but a lot of other things, pedals, wheels brakes, are French. This bike sat in a basement for a long time before it was given to me. I proceeded to ride the hell out of it throughout high school and college.

Added almost 2 years ago by Rainbow83. Last updated about 1 year ago.

Nice! Thanks for sharing

Posted about 1 year ago 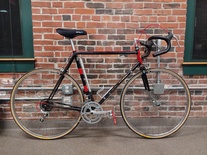