I bought this bike complete from the original owner who purchased it new in 1990. I've had it with me for 5 years before passing it on, also as a complete bike. The first two pictures show what the bike looked like originally, the third picture is how it was advertised before I bought it. The rest are iterations through which bike went through before I passed it on to the next owner. FWIW, apart from wider gear selection, I cannot say that bike rode that much differently (if at all) with more modern components.

nenad has indicated that they no longer own this bike. 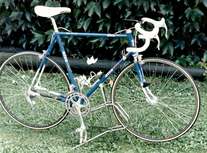