My fixed gear commuter/street race machine. Originally built up as cheap as possible (frameset was $40 on Craigslist, spare parts bins were raided, bro deals were made, a sketchy Campagnolo crankset with a bent spider arm was obtained for free), and I've been upgrading parts since. Hoping to get a new frame soon, but for now, here she is.

Pedals:
Time Z or Stolen Thermalite, depending on the occasion 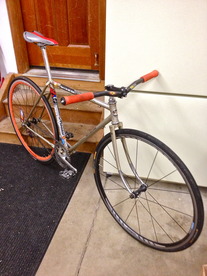