The Masi are among the most sought after bicycles by collectors from around the world. Many racers and champions bicycles were made by Masi, although the labels then applied to the frames were those of the manufacturers-massive brands that were targeting the mass market and were sponsoring the team. Masi frames were used by F. Coppi, F. Magni, L. Bobet, M. Poblet, R. Rivière, Antonio Maspes (of whom Faliero was the mechanic of trust), R. Van Looy, G. Nencini, J. Anquetil (who on a Masi at Vigorelli in 1959 establishes the Record of the hour), V. Adorni and Eddy Merckx.

As of over 4 years ago, BENQ2 has indicated that they no longer own this bike. 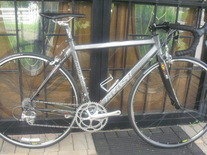