Peugeot UE-8 originally a 10-speed touring bike with fenders and friction light; it's since been stripped down and converted to a single-speed. Serial number indicates it's a UE-8 but I can't figure out a year code; most UE-8s are from the 1970s, but this paint scheme matches 1983 PF60 so it's either from 1983-ish, or it was repainted to match that scheme at some point.

As of almost 2 years ago, dsicle has indicated that they no longer own this bike.

Just purchased this same bike today. One difference is that mine has an full chromed fork. Unfortunately I'm missing the front light. Have the housing, but no bulb or glass. Would you still happen to have the front light from yours?

Posted about 4 years ago 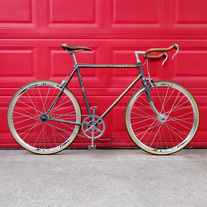