Roberts track built in May 1992 making it the 30th frame produced that year. -------------- This is a recent purchase and I will be the 4th owner. --------------- This frame was built for Spencer Wingrave, one time madison partner of Tony Doyle. --------------- Tubing & build - The tubing used is the original Columbus Max with non-max Columbus or Reynolds fork Blades. The bottom bracket shell is a cast steel unit made to accept only Maxed tubing. Fillet brazed/Bronze welded construction. --------------- Brief history of Roberts - Roberts Cycles was a custom bicycle manufacturer in Selhurst near Croydon, South London, England. Beginning soon after World War II, Charlie Roberts started as a frame-builder for Holdsworth, Claud Butler and Freddie Grubb. In the early 1960s, he started Roberts Cycles in Croydon. He was joined in the workshop by his teenage son Chas. In 1979, Charlie died and Chas took over. The shop closed at the end of May 2015[1] in order for Chas Roberts to take a sabbatical. He has said that he will return to frame building at a lower volume (10 to 12 a year) after approximately two years.[2] The skilled mechanic previously employed in store by Chas Roberts; Brian Phillips, is available independently (though contactable through an email address on the placeholder webpage [3]) for maintenance and upgrading of Roberts cycles. Production was limited by capacity to 100 steel frames per year, and they were made in a bespoke manner to the dimensions, mass and equipment specification requirements of the person ordering when new. A mixture of Reynolds and Columbus tubing was used in construction, which was all completed "in-house". Powder coat finishing was outsourced and completed to a high specification. The frames and completed cycles have a reputation on for the quality of finish, reliability and comfort. The range included track bikes, road bikes, touring bikes, tandems and off-road bikes. Unless built for demonstration of shows, all bikes were tailored to the specific requirements of the customer. Technical specialisms were developed that could be applied including: Fittings in the down tube and cross tube that enabled the complete cycle to be dismantled, and the application of Rohloff internal geared hubs. In the last year of production a prototype Gates belt driven bike was made to explore the potential of the application; though no customer bikes were completed. ----------------- Undecided on the group at the moment.

Click a link below to see past stages of this bike.

Added almost 5 years ago by Sideshowbob. Last updated over 4 years ago.

Posted over 4 years ago

Posted over 4 years ago

Lovely frame with an interesting story! Looking forward how you gonna build it up... - I would choose Campagnolo record track group and some andonized rims ;)
Thanks for sharing!

Thanks. I going to go for C-Record track with c record small flange hubs with Lambada Strada rims for now. I post some further pictures

Perfect choice!! This will be awesome for sure...

Buddy, You have some fantastic bikes, Daccordi, Colnago pista and that OSCA with the 10 pitch

Thank you! Like your Moser, the Orell and the 2 Eddys ;) 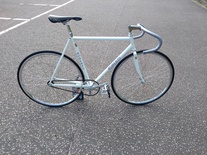