26”/27" Textima time trial pursuit frame was never ridden, fork is used. The frame was built in 1985 at Textima workshop at Nordstrasse, Karl-Marx-Stadt, GDR. This type of bike was produced until 1986. The fundamental idea of a fork with an attached handlebar clamp can be traced back to the swiss company ASSOS, which produced this construction already for the swiss national team in 1978. The Textima Team picked up this idea and optimised it with a sloping top tube, which shortens the head tube and therefore the drag coefficient. The frame was constructed to take more advantage of the slip stream in 4000m team pursuit in the first place, but was used also for 4000m individual pursuit and 1000m time trial. Depending on the athlete. An evolution in these textima time trial pursuit design can be determined. I guess the first ones came with 27”/27” wheels, then 26”/27” (longer head tube), 26”/27” (shorter head tube-shown model). Later there are also 26”/27” versions with monostay, which further lowers the turbulences and gussets for stronger time trial athletes like Jens Glücklich. Especially for the 4000m team pursuit they introduced 24"/27" bikes in 1983, but the 26"/27" was used for 1000m time trial until at least 1987.

Added about 6 years ago by chalybeius. Last updated almost 3 years ago.

Posted about 3 years ago

agreed. thanks for teaching us. enjoy! 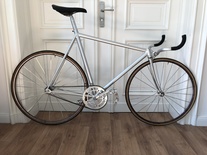