Fork/Headset:
RBE /looks like a fork, which had been used by DURAVIA) / MICHE (same also has been SACHS labeled)

Front Wheel/Hub/Tire:
at the moment a pair of MAVIC 501 Hubs with MAVIC GP4 2nd Gen ... lend from an other bike

oh man what size is this absolute beaut? 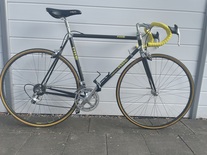