a rather interesting piece of schwinn and american history. One of the best mass market touring bikes made in the 70's.

Frame:
23", Hand-Brazed, Double-Butted 4130 throughout, forged Suntour GS fork ends and dropouts. Originally came in 'Crate Orange', this one was stripped down to the chrome. I should name this bike 'Elbow Grease', cause it took a shit ton of it to get it looking/riding how it is :-) Alas, it wasn't my preferred size and got replaced by an 81' Centurion Pro Tour in 62cm. Thankfully, I was able to pass it along to a friend, who now loves it as much as I did.

Drivetrain/Cog/Chainring/Chain:
Sachs 7 speed cassette, which I have the derailer set to reach 5.

Brakes:
NOS Schwinn approved Dia Compe center pulls. Found a guy on ebay who bought hundreds of these when schwinn closed it's doors in 2001. I was happy to find the orange pads, they match the head badge perfectly!

More Info:
'The Beginning of The End': The World Voyageur was the first bike Schwinn outsourced to Japan, and as Schwinn was one of the first American companies to do such a thing, this particular bike could be one of the first American products ever made by a Japanese company. Only made for one year, (1972 for the 1973 catalog), by Panasonic- who was the only vendor to meet Schwinn's rigid standards, the World Voyageur came lugged with Hand-brazed, double-butted, 4130 cromoly steel, chrome plated head lugs, fork crown and front/rear fork ends, and heavy-duty forged Suntour GS horizontal dropouts with screw adjust. It also featured the first 'Dura Ace' branded Shimano crank, suntour bar end shifters, and Shimano's excellent Crane deraileurs, which were quickly proven to be superior to Campy's Gran Turismo on the Paramount of the same year. This was serious competition to the Paramount series at half the price. In fact now most enthusiasts refer to the World Voyageur as a 'Baby Paramount'. After one year on the market (and not even in the dealer catalog) the World Voyageur was quietly dropped, the Shimano Crane derailleur appeared on the new Paramount Touring, and Schwinn made a large commitment to Panasonic-built LeTours which would become Schwinn's second-most-popular model through the seventies.

As of almost 9 years ago, heathmusic has indicated that they no longer own this bike.

I just got one of these in yellow and drops are Shimano not Suntour. This model was actually produced in 1972 for the 1973 Scwhinn catalog but never was shown until Scwhinn released its own advertisement for the World Voyager. Mine came with the rare scwhinn approved barcons shifters which are stock for that model.

Interesting! You are correct about the made in 72' part, but everyone seems to list them as 73', since they were intended for that catalog. Mine didnt have the original handlebars when I bought it either. Apparently, there is also a 25" model that was made in baby blue, but i've only read about one.

In my opinion this was a test model for Scwhinn to see how sales went with this model before they invested and came out with an actual Paramount branded tourer. The World Voyager sold new in 73' for $275 where the Paramount was $400-$450 P13 or P14 also take into account new cars costed $3-5000. I've seen alot of vintage used bicycles in my day and this is defiantly a high quality tourer.

I agree. I also feel they were testing the idea of outsourcing in general. I don't think they counted on this bike being so damn nice, but Panasonic was top notch, and like you said it ended up being direct competition to the Paramount at a sizeable discount. Although this is such an interesting piece of history, I have been toying with the idea of selling it, as I prefer riding a 62-63cm frame, and recently came across a 79' Centurion Pro Tour in my size, that I am thinking might be a better fit for that slot in my fleet. Am I crazy?

I say go for it and sell it I am gonna be selling most of the parts off mine in hopes to justify keeping the frameset. I believe Centurion also made some full chrome frames.

Yessitr- both my semi pro and pro tour are full chrome under paint. At the end of the day, it's gotta be the right size, so I reached out to a friend and am going to pass the goodness onto him. All is well that ends well.

those fenders look kinda pointless. hahah don't mean that in a mean way...? but i dig this bike!

hey, they came with the bike when I bought it, and I ended up liking them more than I thought i would

what did you do to strip down the frame to look like that? beautiful job. as well, did you cut your fenders yourself or did you purchase them from somewhere?

i believe it was airplane stripper- got it at the local auto parts store, super heavy duty liquid or spray can stripper. need to use it in an open space, wear gloves, eye mask and face mask, but it works, and doesnt touch the chrome. the fenders came that way, shortys, i think Wald makes them?

i dont do any riding in the wet, so I can get by on the shortys ;-)

Whoah, where are my sunglasses :) Very reduced fenders! The black rims are a good contrast too. Do you drive it often?

thanks for the kind words. I havent even taken it on a proper ride yet, just got it built up last weekend. Looking forward to it though!

Super dope. The gumwalls really set it off. 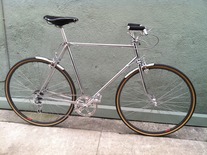