Hi guys and gals! I bought this one three weeks ago for around 50-60£. It was in very bad condition and looked like a bike been restring in the mud for a while... im pretty much an amature that have just find the hobby of bicycles. So I say sorry now before if/when I say or ask a silly question. Anyways, is it a recent price for a bike in this condition? I would like to have a more L´Erioca feeling to it, do you think i can have a new fork more like it? Now since theres rost on the current fork anyways.

Front Wheel/Hub/Tire:
Mavic Cxp/Shimano 105/Continental Gatorskin (not at the pictures)

More Info:
Not in its best shape but a big differance compaired when I bought itl 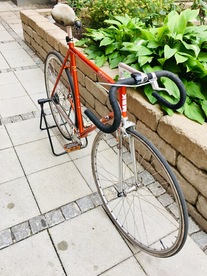