Broke my ankle last spring so it was a good excuse to get rid of my old Ridley. Not that there was anything wrong with it, but it just constantly felt that i wanted something new. Now that my ankle is starting to get better i started looking for new frames, steel frames, to be more precise. I found this Samson on the London forum and started figuring out the parts in my head and built up something pretty basic. Pretty soon i realized it felt a bit boring and it was "just a bike". For some reason the urge for an HHSB-whip got pretty serious so this is what i came up with.

Posted about 5 years ago 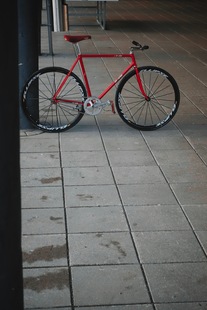