1992 Roscotelli Built by Ross Clark For the 1992 World Triathlon Championships. Most bikes were built while Ross worked at Milremo cycles(while owned by Tim Saunders) between 1982 and 1986, but he continued to build bikes for many racers through until about 1994. Suntour Superbe Pro components. Superbe Pro calipers, period seat pillar , and a shorter stem to be fitted 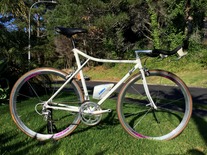