More Info:
Graeme Pearson started building bikes in his garden shed in the early '80's. by the mid 80's he was experimenting with carbon fibre. He built bikes for the New Zealand road and track team at the Barcelona Olympics in 1992. This bike was built only a few years after that. He has since reverted to using PEARSON for all his bikes and co to use to build bikes to this day. His Pearson Z1-eleven has been reported in some circles as the 'fastest bike in the world' Graeme no longer builds bikes in his garden shed, he builds them in a woolshed, where he lives, with beautiful views out over Lake Rotorua 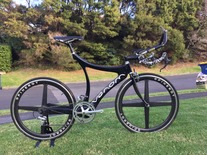