Alois Lang started to build custom-made racing frames in 1958. In 1963 he opened his own shop in Romanshorn/Switzerland where he constructed, brazed and painted his frames. His first major order was placed in the early 70s by the national team of Western Germany. During the 70s and 80s Lang was known to be one of the best frame builders for track and racing bikes. He built many frames for professional riders and amateur racers. But at this time the names of team-sponsors or big cycling companies already covered the names of the frame builders on the bikes which often prevented the artisan's well-deserved renown. It is known that Lang built a bike for Beat Breu for the Tour de France of ’82 which weighed less than 7kg. Breu won the stage Pla d'Adet and the prestigious mountain stage of Alpe d'Huez with this lightweight bike. Overall Lang’s bikes won more than 600 victories. Considering such success it is incredibly that Lang Cycles is widely unknown. Interestingly Lang he did not intend to multiply his output and to grow his company by hiring some people to braze his frames or licensing his name to investor companies. He built his frames himself. He was given the title of “Master Frame Builder” by TI Reynolds and is authorized to build with 753 tubing. When you take a look at one of his frames you have no doubts about it. His frames are master builds. The construction is perfectly done and the brazing is remarkably smooth as well at the hidden angles where the eye usually is not reaching. His bikes are precisely made machines, simply a pleasure to ride and to look at. 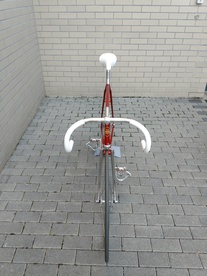