Norbert Ziemen was/is a cycling enthusiast. By the end of his study of engineering he built a carbon frame as his diploma thesis. Strangely he could not find the job he was looking for in the cycling industry after this. Hence he decided to open a cycling shop by himself and start to build high quality aluminium frames. Beeing an engineer, he first wrote a computer programm to design his tailored aluminium frames. When the prototype was ready he presented it to the engineering faculty of a technical university in order to let it evaluate from the highest technical standards. Ziemen ment to compete with the industry. He was skilled and busy, considering the different types and the number of his bikes he made in a small shop still driving around and beeing still appreciated - now more than 10 years after he joined the industry. His tailored frames became well known as some of the most rigid and strongest frames to get, especially for tall riders. Even Team Telekom professionals and other champions like the triathlon world champion Dmitri Gaag used his bikes. Ziemen bikes have special aesthetics. An Italian bike lover will never like them. As typically for German design the appearance of these bikes is not elegant but they are apparently made bulletproof. Technically they were state of the art and no doubt you have a very hard time finding a faster and tougher aluminium frame out there. This frame is a custom ordered track frame possibly an one-off design and was likely used for track races. But this is a bit more than a heavy duty track frame. This is a hammer you can hit the worlds toughest tracks with a thunderstruck. It is just brutal. I still find myself standing in front of that bike and wonder if this was made for the cycling grizzly of the International Circus Festival of Monte-Carlo or for a man called Brutus.

More Info:
Having the bike for years now, I am finally getting satisfied with the built. The only thing left on the parts-to-change-list is the more or less basic Miche crankset. As I use the bike in public I decided to put it on a leash and installed front brakes.

Added over 4 years ago by Thor. Last updated over 2 years ago.

frame is interesting (love the color) but that seat angle detracts from everything. level that seat!!

Posted about 4 years ago 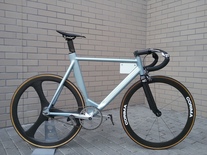