When in 1952 Heinz Müller won the UCI Road Cycling World Championship in Luxembourg he won on a racing machine supplied by Bauer. His team member Ludwig Hörmann came in third. With such a success Bauer cycles became an international recognised bicycle maker and made an impressive come back. Thereafter Bauer proudly introduced the top of the line “Modell Weltmeister” which is still known as one of the most beautiful bicycles of its time. Like many others European bicycle manufacturers Bauer went bankrupt in the late 60ties. The growing wealth made customers buying motorised vehicles instead of bicycles. The doom of Bauer was the beginning of the Walther Company. In 1969 Helmut Walther took over what was left of the artistic cycling branch of the Bauer Company together with its heritage of building high quality bicycles. He started his very impressive way in the niche of artistic cycling. Walther is a perfectionist and due to his own quality standards the cycling industry missed to meet over the years he started to produce most of the parts for his bikes in-house. Besides the frames of his bikes he makes the saddles, axles, cranks and even the bolts and nuts for it. Because of his well-known knowledge and persistence many artistic cyclists simply call him the “Pope”. It is not a coincidence that from 1985-1992 of 116 possible medals in artistic cycling the number of medals won with Walther bikes is impressive 99! It is the result of his enduring hard work. In artistic cycling the bikes do not go fast but a lot of strength is put on the frame. The Pope thoughtfully constructed his bikes and not simply made them. The lugs are soldered with silver to avoid stressing the steel. The requirement of strong and stiff frames made Helmut Walther develop some unique solutions which are really great. Nonetheless having a full order book due to his insistence to build a bicycle in perfect quality he stoped production for a whole year. He spent this time making tests with the material the world’s tubing companies supplied. He developed a new racing bike frame, a new pedal and even a new tube. The technical function and aesthetics of his version of the seat clamp is simply outstanding in the entire cycling industry. The seat tube is not cut anymore at the junction to the seat post where integrity is most needed. The set-stays are soldered into the seat tube and not simply onto it. Water does not pour in the junction anymore because everything is tied. This construction can withstand a force up to 3 tons! Having been a racing cyclist in the past, it was unavoidable that Walther also builds racing bikes implementing the solutions which made his artistic bikes outstanding successful. He basically offered two models: “Spezial” and “Kriterium”. This one is a custom ordered track frame from the 90ties which was used for Sixdays races. 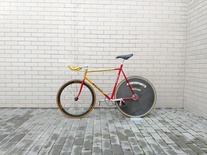