Dave Tesch came out during the rush of Californian hand built bicycle frames. As a young man he started his career working for Trek, doing frame repairs for some shops and according to Dave Moulton he made frames for Masi (USA). He was very ambitious to learn the handcraft of bicycle frame building and eager to become an excellent frame builder. He was gifted and passionate and improved his skills quickly. By the early 80s he opened his own shop, building frames for John Howard. Not much time later he built frames with his own name on it. He quickly became known to race drivers and was contracted by Raleigh to build frames for its racing team. An article of a 1987 “Bicycle Guide” issue says: “…Tesch savoured the opportunity to build for such an elite group of riders figuring that their feedback would be invaluable. The riders made their needs known right away. 'They wanted bikes that were quicker than anything you could buy,' The Raleigh riders liked them so much that, when Raleigh issued the frame building contract to another builder in 1984, several of the team members queued up at Tesch's door to purchase frames with money taken from their own pockets." Tesch built bikes for speed only: racing and track bikes. “If I am going to represent myself as a builder of fine racing bikes, then I want customers to get the same thing that I would design for the world's best racer.” His frames came with an unusual short wheel base and a steep head angle. They were very responsive yet without sacrificing stability. In the early 90s Tesch already had to close his frame shop due to the declining demand for road bikes. He started working for the automobile industry and after a few years he made planes to come back to the cycling business. But he never returned to make bikes because he passed away in 2003. Today Tesch owners still appreciate his creations in regard of both: function and form. They are fast bikes with an aggressive geometry and plenty supply of joy to the rider. This Tesch Track frame is a custom work of frame and fork. Dave Tesch was a friend of the previous owner, who held the Junior World's 200 meter time, in 1984 and 1985, and became a US Senior Team Member in 1986. He helped in the design and configuration of the frame and fork. This work was put through wind tunnel testing as the project was to make a perfect configuration for sprinting. The fork crown is one of a kind. The blades have its maximum dimensions a bit under the crown. It was built between 1987 and 1988 for the US Olympic Trials, in Houston and was taken to Seoul for tests at the Olympic facilities in March of 1988. Unfortunately due to an injury the owner could not join the games. But later in 1988 he rode this bike at an event in Columbia and won the sprint in the velódromo of Medellín before 30,000 people. In 1989 frame and fork were repainted by Tesch and stored since then. The frame already endows delight at first sight. Looking at it carefully makes your eyes stick to it. It is a superbly done piece of craftsmanship and it goes as good as it looks, proving that Tesch bikes are built for speed.

More Info:
Except for the bottom bracket shell the frame is completely lugless with a 3-5 degrees sloping top tube and 1 inch offset on the fork. Seat tube is 57cm, top tube is 59cm.

Click a link below to see past stages of this bike.

Added over 3 years ago by Thor. Last updated about 2 years ago.

Posted over 2 years ago

You CAN do it! One of your bikes without a seat angle that hurts my eyes.

It will never happen again!
;-)

Truly great. Look at Principedal's Masi Pursuit 3vt for a good foto of the Masi builders. Fotos can be deceiving but I think Dave Tesch is one of those fellows.

I would say you are right. He was a young man these days. 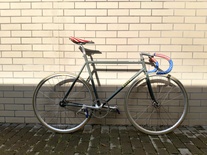