Robert Millar, the great Scottish cyclist and "King of the Mountains" at the 1984 Tour de France, once quipped that MBK stood for "Made by Klingons" because he thought their bicycles were awful to ride. This MBK is built in the traditional British time-trial style with a single, large chainring. There are plenty of French design quirks: a rear brake cable channel under the top-tube, dropped seat-stays, and a nested seat-post binder bolt. The frame is also constructed using "Inexternal Brazing", a process whereby the tubes are brazed both internally and externally for a cleaner, more rigid join.

Added almost 9 years ago by diecycling. Last updated over 7 years ago.

Urgh, so crazy nice. Saw one locked-up this Summer being used as a single-speed beater. Would kill to find one of these frames in my size.

Posted over 6 years ago

This rooster might be the coolest mark I've ever seen for a bicycle brand.

Posted over 8 years ago

Posted over 8 years ago 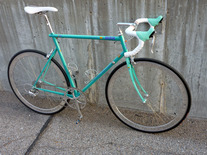