More Info:
Was on the hunt for a pursuit/tt frame a few years back and stumbled upon this gem. I sold it for some reason shortly after purchasing; probably because I realized how illogical it would be to ride any distance on it comfortably. I definitely regret selling it though (or at least wish I'd of taken some better pictures). Would've made a really cool restoration project. A few people questioned whether or not it was a true John Slawta frame solely based on the dropouts (can't remember what they were). They claimed he never built bikes with them. I never got around to emailing him before I sold it so who knows. Either way, hope someone somewhere is giving it the business.

As of almost 8 years ago, dietrootbeer has indicated that they no longer own this bike. 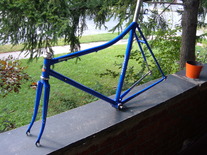