should have kept this one dammit

Front Wheel/Hub/Tire:
Velocity DeepV laced to a Dura-Ace track hub , with a Continental GatorHardshell 23 - which when mounted on the deepv is more like a 20-21. Love it !

Rear Wheel/Hub/Tire:
My main rear wheel is a Velocity DeepV laced to an All-City track hub , with a Continental GatorHardshell 23 as tire. I have an old HED disc that I covered one side of in stickers that I like to ride around on some time ( with a cheap old Kenda domestique training tubular on it ) but it has no lockring so it's really sketchy for serious rides.

More Info:
bought this bike in mint condition off a gentleman who acquired it new in the late eighties ( 88-89 ). He told me he rode it for one year trainig indoors and then it sat in his indoor storage ever since. I originally thought that the Gerald ODonovan sticker on the frame meant it was built by him - but after reading up on these frames a lot I discovered that the GODV sticker does not guarantee that he actually built the bike but that he definitely designed it .. more often that not it was the other SBDU/LD guys whom actually built the frames. This frame is from the Nottignham Lightweight Division which existed for a short while after the Ilkeston SBDU closed - or so I do believe. some of the components listed aren't in the pics, yet. ;)

Added over 7 years ago by ObiSean. Last updated about 4 years ago.

As of almost 7 years ago, ObiSean has indicated that they no longer own this bike.

Ive just found a 52cm one of these with some lovely parts here in the UK but the guy wont post! Love the new setup by the way!

The skate stickers look so rad

yes indeed - i may have snapped a few ollies in my time ;)

Nice man, I've never seen a yellow one before. Does it have an 'SB' frame number stamped on the BB shell? I have a very similar frame but a little older I think so check out my profile. Oh and by the way the 'GOVD' or 'GOD" decal stands for Gerald O'Donovan.

cheers and thanks for the name correction there ! this bike does not have an SB serial ... the serial points to Worksop factory Feb 1978 - but 501 tubing didn't exist until 1983 .. so I figure it must be a 1988 produced in Nottignhman's Special Products Division - the year after the SBDU was closed from what I've read. still trying to get more info on the color and the 501 tubing. there is another one just like it on velospace with a november 88 date made with 501sl tubing .. but i'm not a member so I can't ask the owner anything ..

Yeah it came out of the Lightweight Division factory for sure. Ive actually found what looks like your exact bike in a Raleigh brochure on Retrobike if you want to check it out.
http://www.retrobike.co.uk/forum/viewto...

sick ! thanks a ton man! that puts all the mystery to rest!!

Yeah happy to help. I was just flicking through and noticed the yellow! 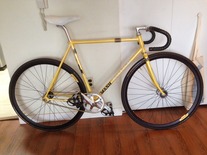