this popped up on the local 'list and a friend bought it - after discovering it's true NJS nature and realizing it was too small for him he sold it to me.

Frame:
52cm Bomber Pro frameset ( KAISEI 8630 Nickel-Cr-Mo) NJS , Tsuruoka racing confirmed that this frame was built for and raced by a pro Kierin rider in Japan but would not tell me the name of the rider .. just the dates.

Fork/Headset:
the headset on here was a mishmash of old Tange Levin parts and Hatta Swan .. but the bearings were going so I replaced it with a Campagnolo Record headset - which required milling the fork crown down to accommodate the standard size race.

More Info:
sent Tsuruoka Racing some pics and the serial and they confirmed it was authentic and that it was made for a pro Keirin racer in 2002 - they wouldn't say who but they did give me info on how long it was raced and when the rider it was built for retired. I also managed to win a social media contest with tsuruoka racing with this bike - thanks to the seawall here really;) They whipped me up a custom painted bike stand to match the bombers paint job and decals and shipped it to me all the way from Japan !!! the full story : when my friend spotted this bike on craigslist it was dirty and had broken spokes , grass growing through the cranks and was in bad shape. he noticed the wheels on it were good and the price was super low so he bought it and then discovered it was a bomber pro ! we searched around town and the local scenes for an original owner as NJS frames don't just get left behind .. and after a month we came up with nothing - which is when I bought it from him. A few months later - after putting about 1500k on the bike and upgrading pretty much everything but the crankset my friend was contacted by a dude who claimed the bike was his ! he had just returned from months overseas and had spotted it on my pals insta - and managed to get ahold of him as he worked as mechanic at a bike shop. long story short we all met up to work it out the next day - and in the end the original owner opted to let me keep the bike in exchange for the $$ I had paid my buddy for it. my buddy agreed - he got to keep the original cockpit and wheels that were on it for his original investment - and to make up for the hassle I sold him a super rare track frame that was a wee bit to big for me.

As of almost 2 years ago, ObiSean has indicated that they no longer own this bike.

the stand I won by posting some seawall photos of the bomber - they painted it to match my bike color and decals and shipped it all the way from japan to BC for me .. pretty f'n cool ;)

Posted over 5 years ago 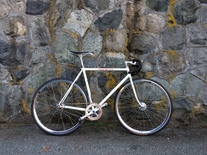